This type of service, which is also known as a “high-leg”, “wild-leg”, “stinger leg”, or “wild phase” service, is common in older manufacturing facilities with mostly three-phase motor loads and some 120 volt single-phase lighting and plug loads. 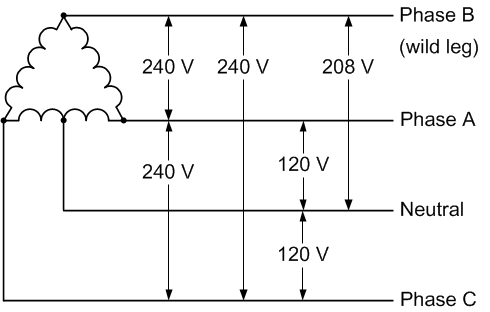 This is the most common four-wire three-phase delta service and is essentially a 240 volt, three-phase, three-wire delta service with one of the 240 volt transformer winding center tapped to provide two 120 Vac circuits, which are 180 degrees out of phase with each other. The voltage measured from this center tapped neutral to the third “wild” leg is 208 Vac.

This service almost always has a neutral connection, but in some rare situations, the neutral conductor is not available. It generally exists at the service entrance, but may not run to the panel or load. In theory, a four-wire delta without neutral is just a three-phase delta, but there is one difference. In a normal three-phase delta, ground will either be the center voltage or one one leg, but a three-phase delta derived from a four-wire delta transformer will have ground halfway between two legs. Delta model WattNode meters are the best choice, as they will work with or without a neutral connection. This is much less common, but we do occasionally get requests to measure this type of service, which is essentially identical to a 120/208/240 service, but with all the voltages doubled.